I’ve just read an article in the RHS magazine ‘The Garden’ January 2014, whereby they comment upon a survey of 32 commonly grown summer-flowering plants (researched at University of Sussex) which have a one-hundredfold variation in attractiveness to their pollinators! Agastache, Nepeta, Origanum & Lavender were rated highly! 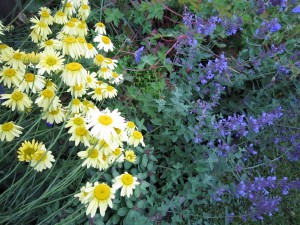 Anthemis EC Buxton with Nepeta on the right

It also doesn’t appear to matter whether the plants were natives, hybrids or cultivars – Â the openness of the flowers are the main attraction! Â  Check out the website for more info. and help keep the bees buzzing for many more years to come! Â  Â Â Â www.rhs.org.uk/perfectforpollinators

I have been too busy over the last couple of months to keep up with the blog, but decided to rest and relax a bit, and been out deadheading the [more]

I've been watching this lovely red squirrel for the past hour or so, feeding from the fat feeders. (I should really be filling the van for tomorrows sale!!) It actually let [more]

Scotlands gardening show is on at Ingliston, Edinburgh on the last Friday /Saturday of May and Sunday 1st June! I should be preparing pots and trays, labelling etc, but decided [more]

This has to be one the most beautiful spring flowering bulbs! With its nodding chequerboard heads in differing shades of purple and occassionally white, no spring garden is complete without [more]

Even though we haven't had a day in the last 5 months or so where it hasn't rained, the perennials, shrubs and trees etc are all showing signs of new [more]

Helleborus foetidus (or stinking hellebore as it is commonly called) is now budding up nicely in the gravel ! I meant to prick out the seedlings last year, but didn't [more]

As our Daffodils and Narcissi have been forcing themselves through all that muddy ground of ours, has anybody else seen any in bud or bloom yet! It's been such a [more]

This is a really hardy shrub, which will grow almost anywhere in any type of soil, but people either love or loathe it! I really like it during the winter [more]

If any body out there gets the Sunday Post, you may well have come across an article about my new online business sending out plants by mail order (Sunday 19th [more]

This has been one of the mildest winters we've experienced here in Glenalmond in the past 10 years - I realise it's only part way through, but we've usually been [more]